The ecology and biology of many species of garter snakes originating from Mexico has not been well researched. This certainly applies for the Short-tail Alpine Garter Snake Thamnophis scaliger.

This small and short species of garter snake is also known (Rossman, Ford & Siegel, 1996) under the English name “Mesa Central Blotched Garter Snake”, referring to its blotched pattern and the general area where it occurs in Mexico: the “Mesa Central”.

The mesa Central refers to southern part of the “Mexican Plateau” that occupies a large part of central Mexico and that has an average elevation of 2000 meters.

I have kept and bred this  relatively secretive species for a few years.

This species does very well in captivity and it is very well suited for a more naturalistic set up.

Length and size of Thamnophis scaliger

The Short-tail Alpine Garter Snake is a very small species and it may be the 2nd or 3rd smallest species within the genus of Thamnophis. Rossman, Ford & Siegel (1996) describe this species as a short species with a maximum total length (TL) of 567 mm.
All my adults are smaller than this. My adult females vary from 448-512 mm TL, my adults males are 412-473 mm TL.

Not many species of garter snakes are this small as adults. The only two species that are smaller are the elusive Thamnophis exsul,  and maybe Thamnophis brachystoma.
Although maximum total length of the latter species (559 mm in Rossman, Ford & Siegel , 1996) is very similar to Thamnophis scaliger.

Despite being small, especially the females are quite stout bodied compared to other species of garter snakes.

This  already becomes noticeable in the small babies when they are a few weeks old and feeding well.

The Short-tail Alpine Garter Snake only occurs in Mexico. The map in Rossman, Ford & Siegel  (1996) shows the known distribution in Mexico.

Thamnophis scaliger is one of the many endemic species of garter snakes in Mexico, meaning that they do not occur outside of Mexico.

And within Mexico T. scaliger is only known to occur in a limited area, in the following states: Guanajuato, Jalisco, Michoacán, Mexico and Morelia; at elevations between 2288 to 2575 meters.

Because of its secretive nature I would not be surprised if in the coming years biologist discover new places outside the area it is now known to occur, just like I personally found them in a previously unknown area in northeastern Michoácan (Bol, 2017).

Its habitat is described as semi-arid desert-scrub valleys and oak forests at the lower portions of high mountain ranges.

Observations on T. scaliger in the wild

I have observed this fascinating little garter snake on a few occasions during my travels through Mexico.
I will just present here the highlights, for more detailed information please read my article elsewhere available on my site (Bol, 2017).

The first time was in North-Eastern Michoacán, not too far from the city “Ciudad Hidalgo”  where I have observed them in a little park.
I did not expect to find them here since they were not known from this area.

A fast flowing river had carved out a valley between mountain slopes covered in pine forest.
The valley itself was mostly open grassland where horses and cows kept the grass short.

It was May 25th and I found 2 pregnant females coiled up under a rock. They both had a snout vent length of 33 cm so this species matures at a very small size. The altitude was appr. 2160 meters above sealevel, which is lower than previously known (Rossman, Ford & Siegel, 1996).

The next day I searched in another valley where I found a 3rd pregnant female (SVL only 31,5 cm) coiled up under a rock. It was an open grassy field bordering a very small mountain stream in a pine forest at approximately 2510 meters altitude.

On November 23rd I visited both valleys again and in the second valley I found at the same spot 2 small males of Thamnophis scaliger, coiled up under rocks. They had a total length of 26,1 cm and 29 cm.

On the 20th of November of another year I searched in another habitat not too far from Atlacomulco, in the state of Mexico.

The habitat was a huge open valley covered in grass with a small creek running through it and many man made ponds used for cattle.

Under a rock that was lying in the grass on the “dyke” of a small pond I found a beautiful male Short-tail Alpine Garter Snake of 40,4 cm total length. Altitude was 2740 meters, so higher than previously known (Rossman, Ford & Siegel, 1996).

When I first found this species in the wild I thought I was looking at a checkered garter snake (Thamnophis marcianus). 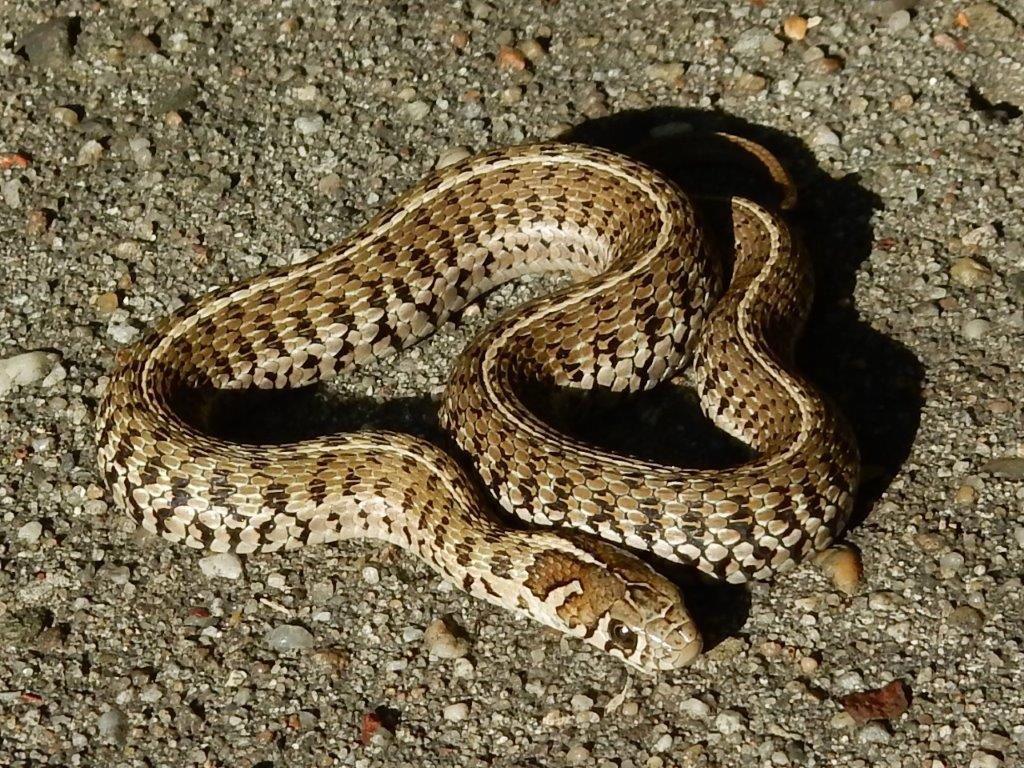 A pale light brown species of garter snake, with inconspicuous dorsal stripes and with 2 alternating rows of (small) black dots. Rossman, Ford & Siegel , 1996 describe the pattern of T. scaliger  as “brown with a series of short (up to 2 scales long), black-edged, dark-brown blotches anteriorly; sometimes these blotches are broken up to form two rows of alternating black-edged, dark-brown spots”.

Also when you look for pictures of T. scaliger on the internet you find mostly the type with the single row of big blotches between the stripes.

As with many species of garter snakes the variation with the species is large  They can have a single row of large blotches between the stripes, but the pattern can also break up in 2 rows of small blotches. Sometimes the blotches are quite small, or only the smaller row above the lateral stripe is visible.

Ground color varies from a very pale brown color, light brown, dark brown and with greenish tones. The dorsal stripe is usually distinct and quite pale, from yellow to white and only 1 scale wide. The lateral stripes are paler then the dorsal stripe and less conspicuous.

A big difference between T. scaliger and T. scalaris is the length of the tail: in T. scaliger the tail length is very short.

A second difference between T. scaliger and T. scalaris can be found in the pattern / coloration of the supralabials.

In T. scalaris all supralabials are light in color, whereas in T. scaliger the last 1-1,5 supralabial scales near the corner of the mouth are dark brown like the adjacent temporal scales.

A third difference that is mentioned Rossman, Ford & Siegel  (1996) is the light chin in T. scalaris that would be in  contrast with the color of the ventral scales.

In T. scaliger this contrast is absent. I have to say that that I find this 3rd difference not very obvious, but the first 2 differences are usually enough to tell the 2 species apart.

Overall I would say that T. scaliger is a very attractive and unique species, even though it lacks very conspicuous colors.

Thamnophis scaliger does very well in captivity. I have kept T. scaliger in several different terraria, always in little or bigger groups. Currently I have a breeding group of 2.3 in a terrarium of 59 x 40 x 40 cm (59 cm being the length).
Since the snakes are pretty small this size is sufficient, although a bigger set up of 100 x 50 x 50 cm gives more possibilities as far as different temperatures and moisture ranges are concerned.

The terrarium is full glass with ample ventilation on top. A reflector bulb is hanging on one site of the terrarium in such a way that a temperature gradient is created, from 30 – 35°C under the lamp to 15 – 25°C  in the cooler corner. The bulb is burning approximately 12 hours a day and at night the terrarium temperature drops to ambient temperature in my snake room. Ambient night temperature can be up to 22 – 25°C in the summer, and 12 – 18°C in winter/ fall/ early spring. During the winter I keep them even a bit more extreme, but I will describe that underneath.

I have experimented with the substrate and I have concluded using cocopeat and wood chips works very good for this species.
I try to keep the warmest area in the terrarium dry with woodchips mixed with a bit of cocopeat and in the cool area I use a thicker layer of cocopeat that I keep slightly moist.

I have kept them during a few summer months in a completely dry and hot set up that was also heated from the bottom. The snakes did not do well and had problems shedding their skins.

Since the snakes like to hide I use rocks, pieces of bark, peat moss and leaves so the snakes have ample opportunity to hide.

I also have a piece of bark just below the bulb so the snakes can bask both in the open but also underneath the bark and can reach their preferred body temperature of approximately 28-32 °C.

I also use some branches to give the snakes some opportunity to climb.

A relatively small water bowl of 12 cm diameter completes the set up. They do not spend much time in the water.

A true hibernation is not necessary. In my article (Bol, 2017) I describe more in detail how I have kept T. scaliger through the winter.

In short I have used 2 methods. Keeping them warm throughout the winter in my snake room. Since at night I have no additional heating the snakes do notice it is winter since the temperatures can drop to 12 – 16°C at night. The second methods is to put them in a terrarium in a cold room or in a shed.

All 3 groups did fine and females produced babies in all 3 groups.

In my article about Thamnophis scaliger (Bol, 2017) that can be found online in English on this website you can find all information how to keep and breed this fascinating little species of Garter Snake.

I am breeding this species since 2013.