Just like the other new subspecies it has been described by Conant in 2003. Conant named this subspecies patzcuaroensis as a reference to its habitat: Lake Pátzcuaro in Michoacán, Mexico.

My breeding group originates from Lake Zirahuén which lies about 13 km south of Lake Pátzcuaro. Originally I thought these specimens from Lake Zirahuén might belong to a new subspecies, and perhaps in time they may still be described as a new subspecies. But since these 2 lakes are so close together and since I have also observed Thamnophis eques in aquatic habitats in the areas surrounding Lake Pátzcuaro it is very well possible that all snakes in the general area around Lake Pátzcuaro belong to the same subspecies.

Hence I feel confident at the moment to label them as T.e.patzcuaroensis.

T.eques is a very large and heavily built species of garter snake and Conant (2003) had set the new record for T. eques (obscurus) at 121,6 cm total length (TL). Especially the females can grow very large and heavy. In fact adult female T. eques are the largest garter snakes I have ever seen. The only garter snake that really grows to much larger size is Thamnophis gigas from California. The new record for T. eques is now set at 130,7 cm (Bol & Bruchmann, 2012).

The Lake Pátzcuaro Garter Snake occurs in lake Pátzcuaro (Conant, 2003). My breeding group originates from lake Zirahuén which is situated only 13 km south of Lake Patzcuaro.

But I have personally observed a Mexican Garter Snake also near Tiripetio, Michoacán which looked a lot like the ones from Lake Zirahuén, and where suitable habitats (wetlands,

More research is needed but I expect that T.e.patzcuaroensis is wider distributed around the lakes of Pátzcuaro and Zirahuén.

Or perhaps there are zones of intergradation between the subspecies like Conant(2003) described for T.e.cuitzeoensis in the Laguna Yuriria.

Observations on T. e. patzcuaroensis in the wild.

Conant (2003) describes in his article his observations in the natural habitat of the Lake Pátzcuaro Garter Snake in Michoacán, Mexico.

I have only visited lake Zirahuén and the area around Tiripetio. 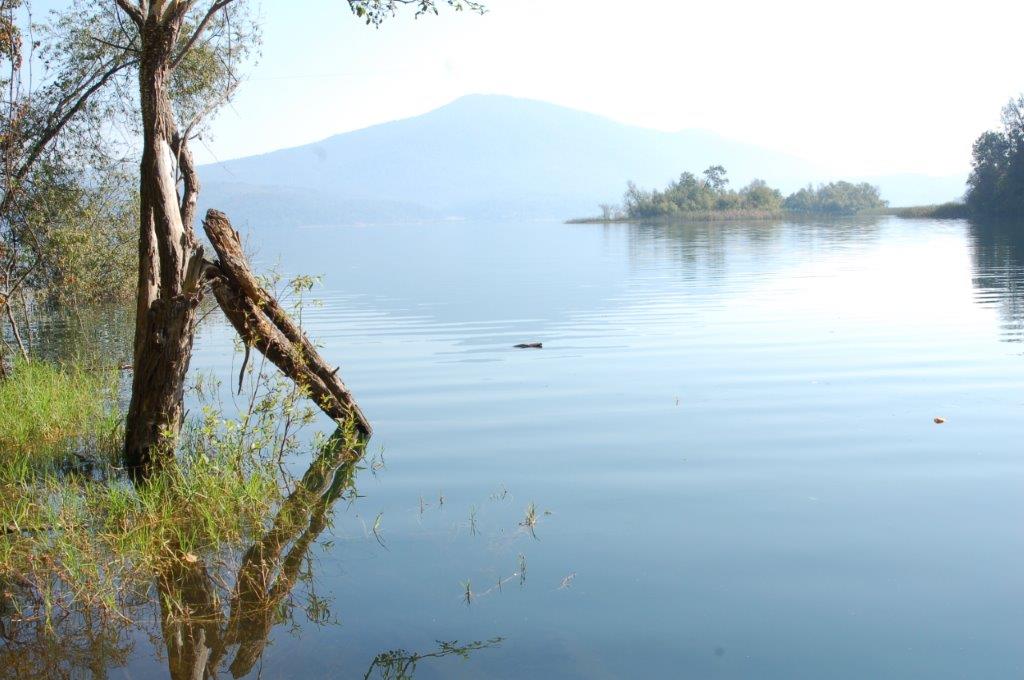 Lake Zirahuén is a beautiful deep mountain lake (42 meters) filled with very clean and clear water. Its altitude is 2080 meters.

The area surrounding the lake is relatively unspoiled, with forests and limited human habitation.

I have observed a few specimens late in the year, on November 20th and 21st. They were basking on the shores both early in the morning and late in the afternoon.

One snake was observed swimming in the lake floating on the surface just like I have seen in T .e. scotti and T. e. obscurus.

Like in many of the other lakes in the volcanic belt of Mexico also here Thamnophis eques lives sympatric with Thamnophis melanogaster canescens.

As possible food items I have observed some frogs. And there are lots of fish inhabiting the deep lake. 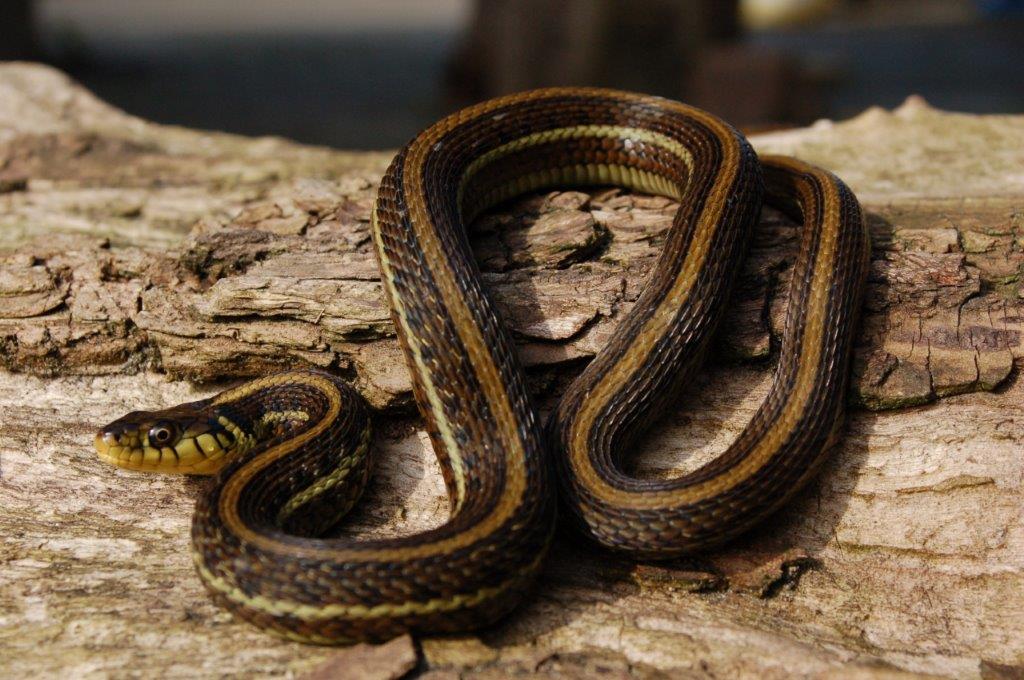 Thamnophis eques patzcuaroensis is a brown garter snake with 3 clearly defined stripes. There is a double row of dark spots in between the stripes. The row touching the lateral stripes is often the most visible one.

Usually all 3 stripes stand out well with the brown coloration of the surrounding scale rows.

All my specimens have a beautiful warm bright yellow throat, supralabials and neck spot.

The Lake Pátzcuaro Garter Snake does very well in captivity, just like the other subspecies of T. eques.

Due to its large size it is recommended to keep them in a terrarium with a minimum size (for one adult couple) of 100 x 50 x 50 cm, although a length of 150 cm would be more suitable. They do well in a dry and well ventilated cage with just a water bowl for swimming and drinking. The water bowl should at least be big enough for them to submerge in. Local temperatures in the terrarium should rise during daytime to 30 – 35 °C. T. e. patzcuaroensis are voracious  feeders and relatively easy to keep.

The snakes show themselves a lot basking on a branch under the lamp. Especially when the terrarium is not so warm and the snakes need to bask on the hottest spot to reach their optimal body temperatures.

A true hibernation is not necessary. A cool period in the terrarium of 2 – 3 months mimics the natural situation and will probably be sufficient to keep the snakes in good health and to stimulate breeding. Up to now I hardly give the snakes a hibernation. But the snakes are clearly less active in the coldest winter months; they bask less and often refuse to eat for several months. So do not worry when this happens. During the winter months night temperatures in my snake room (and in the terrariums) drop at some nights as low as 8 – 12 °C (although 15  -17 °C is more normal).

I keep my adult snakes in a completely dry terrarium with a water bowl. This species is also very suitable for a so-called “aqua-terrarium” with a lot of water and only a small (completely dry!) land part which is heated by a powerful lamp to 30 – 35 °C. In such a habitat terrarium the highly aquatic snakes will show more of their natural behavior.

Unlike T. e. scotti  and T. e. obscurus they have only reproduced once a year (so far) with babies typically born in July and August. Despite keeping them under similar circumstances as the scotti and obscurus.

My recent publication about Thamnophis eques scotti (Bol & Bruchmann, 2012) that can be found online in English on this website can serve as a standard recommendation (care sheet) also for this subspecies of the Mexican Garter Snake.

I am breeding this subspecies since 2012.