Thamnophis butleri is very rare in captivity and is hardly kept in Europa.

He has been imported in the past however and in some of the older literature reports experience with keeping this species in captivity can be found.

It belongs to the group of smaller species of garter snakes (together with a.o. T. brachystoma, T. ordinoides, T. scaliger and T. scalaris). These smaller species seem in general to be less depending on water and they are generally found beneath objects like rocks and pieces of wood. T. butleri is closely related to T. radix and T. brachystoma.

Length and size of Thamnophis butleri

Butler’s Garter Snake is a relatively small species. The average total length is only 38 – 51 cm. Females normally can grow to a maximum of 60 cm. Males remain way smaller.

Despite their limited size they look relatively stout.
The head is quite small, which is typical for a worm specialist.

For female T. butleri the maximum size ever recorded is 73,7 cm total length, but this is exceptionally large.
My largest female is currently 7 years old and 62,5 cm long.
My largest male has a total length of 50,4 cm, also at the age of 7 years. 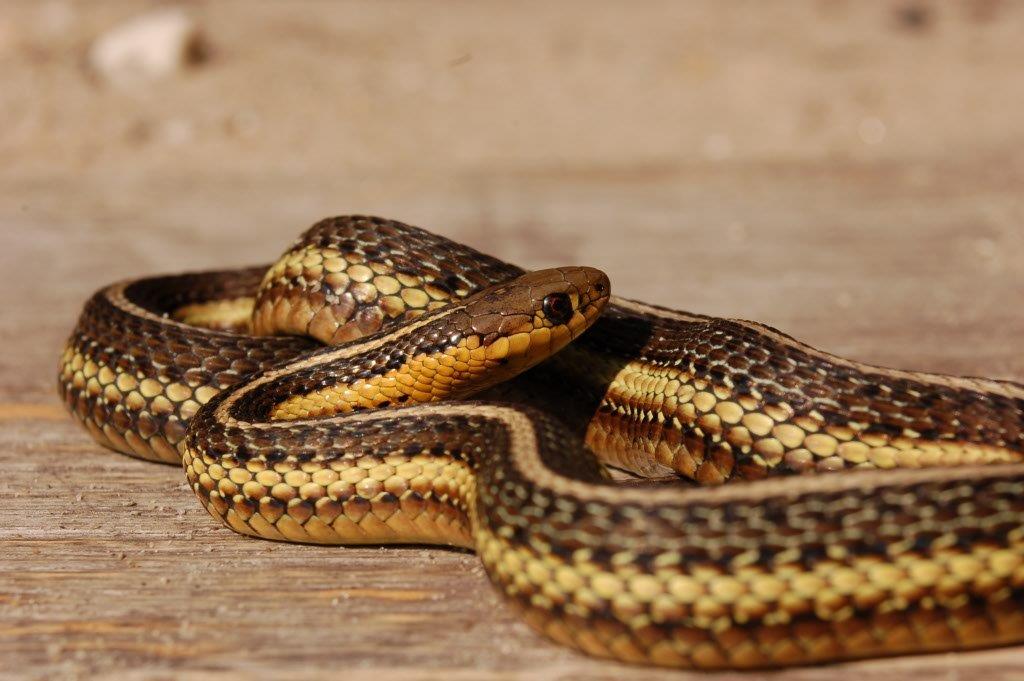 The lateral stripe is located on scale row number 2,3 and partly on the lower edge of 4. In rare cases also the upper edge of row 1 is involved. This color combination does not seem to very unusual and is seen often in many species of garter snakes (a.o. T.sirtalis).

But a closer look at the Butler’s Garter Snake will reveal a very beautiful and unique species. The brown dorsal color often has a very warm chestnut brown or reddish brown tone, especially below the lateral stripes.

The head is quite small with beautiful shiny scales.

The belly is usually light in coloration without special marking.

This diurnal snake is often clearly visible in the terrarium, as long as it is not too hot. They will spend a lot of time basking below the lamp, on a branch or on the ground. This despite the fact that in the wild they do not show themselves so much in the open, at least that is my personal experience. Of course this will depend a lot on how the terrarium is set up.

Unlike most of my garter snakes the Butler’s Garter Snakes really seem to do well when they are provided with the possibility to hide in a thicker layer of (locally light humid) soil.

“Cocopeat” seems to be very suitable for this, and that is what I am currently using.

So it is important not to keep them in a completely dry terrarium. In the wild they feed predominantly (exclusively) on worms. I give my adult Thamnophis butleri mostly thawed fish (smelt) supplemented with vitamin B1. Every now and then I feed them with worms, to which I sometimes add some “pinkies”. The newborn babies I give a mixture of worms and small pieces of fish. Once they accept that readily I bring the down the amount of worms.

When Butler’s Garter Snake is exclusively fed with worms it is very important to add extra calcium to the worms.

Butler’s Garter Snake occurs in a relatively small area in northeastern USA (Michigan, Ohio, Indiana and a relict population in Wisconsin) and in southeastern Ontario (Canada).

They have been found at altitudes between 152 m and 457 m.
My snakes originate from Michigan and Ohio (USA).
I have observed Butler’s Garter Snakes both in Ontario and Michigan.

The typical habitat is best described as “tall grass prairie”.
Its consists of open grassy areas with relatively high perennials and some isolated trees. The habitat in Michigan was in a low area and the soil was very wet in early spring. There was no open water very close by but it had little canals that contained water in early spring. Later in summer these were completely dry.

Thamnophis butleri was found beneath boards, rocks and other objects. Thamnophis sirtalis sirtalis and Storeria occipimacculata occur sympatrically in the same habitat and sometimes even under the same objects.

Michigan has a typical land climate: winters last long and it can be very cold. Winters can start as early as October and often weather improves as late as late April. Thamnophis butleri likely will hibernate for at least 5 – 7 months in the wild.

Summers however are very hot, sometimes also humid with a lot of rain.

My article on Thamnophis atratus atratus (The Santa Cruz Garter Snake) that can be found online on this website can serve as a rough guideline how to keep and breed Thamnophis butleri as well. But obviously there are differences with T. atratus: Hibernation can last considerably longer in T. butleri. A thicker soil layer consisting of “cocopeat” that locally can be moist seems to be better suitable. Also the strong preference for worms should not be forgotten.

This gives me the opportunity to breed snakes from unrelated parents in order to minimize the change of inbreeding.