This little water snake from the south of France has always been one of my favorite species.

It is a beautiful and highly variable species and it reminds me to my first holiday to the reptile rich area in the south of France when I was a kid.

Growing up in an area in Holland where there are no snakes, and the only reptile is the (back then extremely rare and almost extinct) Lacerta agilis.

Spending 2 weeks in the middle of summer in the Cévennes (France) looking for snakes in the crystal clear rivers loaded with fish and frogs: it was like a trip to reptile paradise and it was love at first sight.

Natrix maura is very well known species in Europe. It was not the very first snake I ever kept, but it was the first species I bred successfully back in 1986.

And I have been breeding them almost every year without exception for the past 30 years.

Length and size of Natrix maura

One can find record sizes in literature (Boulenger, 1931) for Natrix maura of approximately 100 cm but this length is very exceptional.
Actually the Viperine Water Snake is quite a small species.

Most older adult females are typically approximately 60 – 70 cm long and they are relatively heavy build. Occasionally you can find one of up to 80 cm.

My largest female is currently 68,7 cm and she is 12 years old. Males are much smaller and thinner and are typically 40 – 50 cm. Sometimes they grow a little over 50 cm.

Description of the Viperine Water Snake

Viperine Water Snakes are extremely variable both in color and pattern. 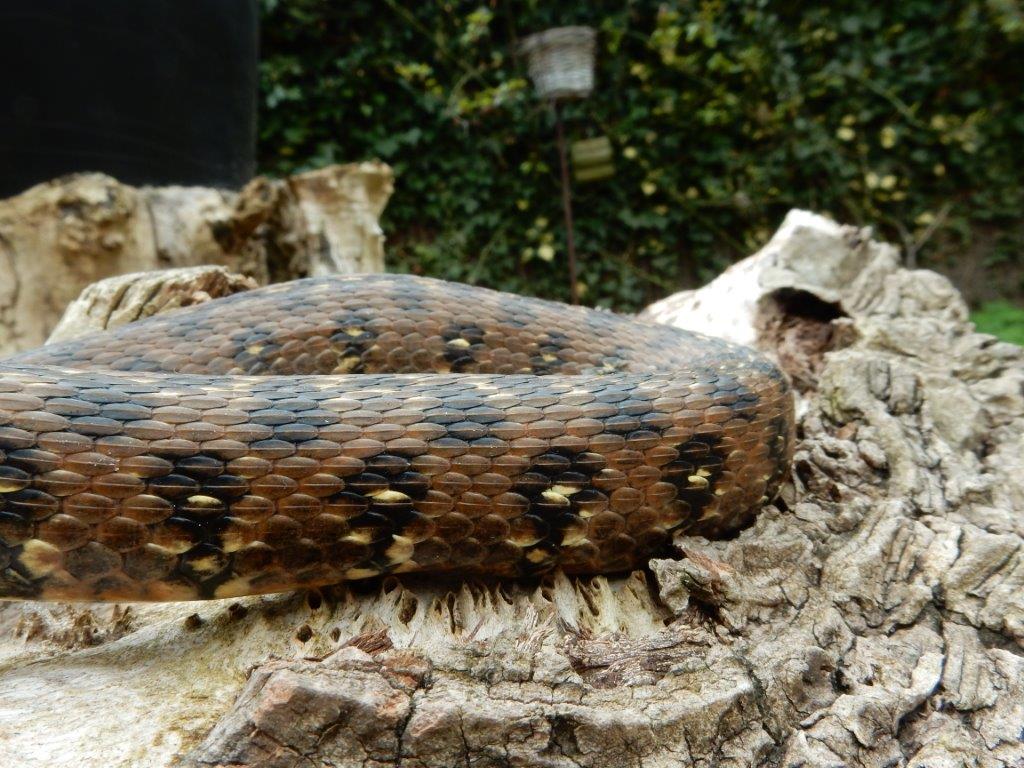 Usually they have 2 clear rows of dark spots on the back that can form a zig-zag pattern quite similar to some European vipers.
On the side they also have spots, that sometimes have a light center.
Some populations in the wild are highly variable, others are more uniform.
In some areas (more abundant in Northwestern Africa and southern Spain) specimens with dorsolateral stripes occur.

Viperine Water Snakes do well in a warm and dry terrarium with a relatively small water bowl.
For 1  -2 couples minimum size of the terrarium could be 60 x 50 x 50 cm, but 80 x 50 x 50 cm gives them more space and more variation in temperature.

Night temperatures in spring and fall may drop considerably (as low as 12 °C or even lower), this is no problem.

They do not need a lot water to do well in captivity. But I have kept Viperine Water Snakes also in a aquaterrarium where the whole surface was water and a floating (hot and dry) island (that consisted of 25% of the surface) provided basking spots.

Feeding them live fish forces them to hunt a lot in the water. The adults snakes are almost always well visible and basking on branches on the warmest spot in the terrarium.

They are easy feeders, although the babies sometimes need some tim

e to get adjusted to dead fish.

But all my adult snakes take smelt from a plate without problems.
I give them predominantly fish (smelt) and sometimes small live fish for the babies to start with.

I hibernate both my adult and baby N.maura at 1 – 7 ºC in the refrigerator or in a cold shed; 2 months for the (even the smallest) babies and up to 3 – 5 month for the adults.

Distribution and habitat of Natrix maura 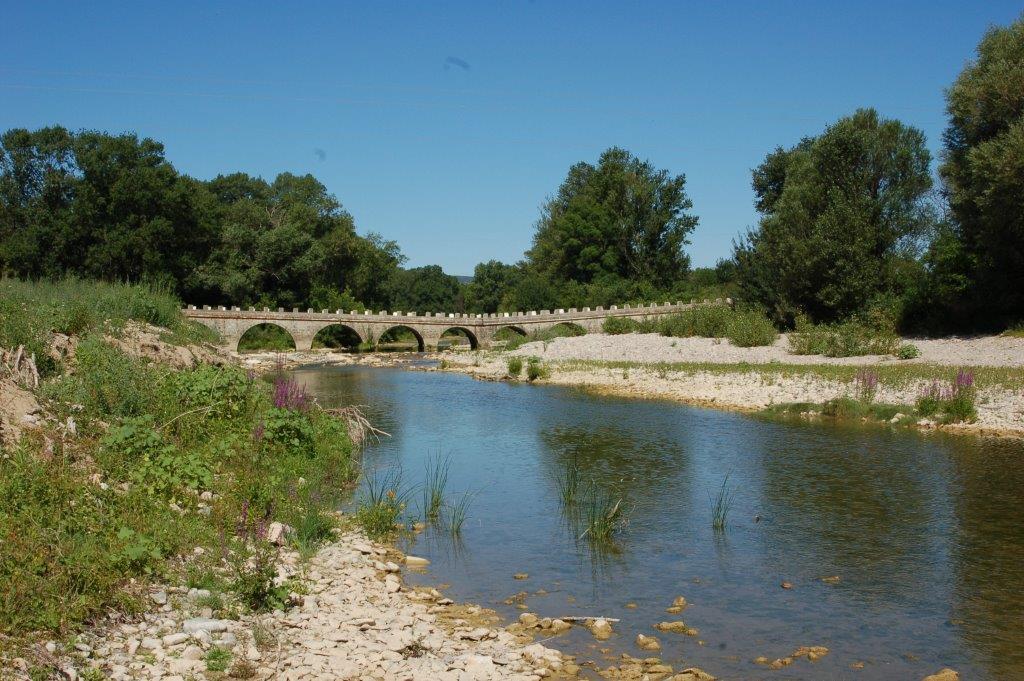 Typical habitat in the Cévennes.

The Viperine Water Snake occurs from the middle of France southwards to Spain, Portugal and the coastal area of northwestern Africa.

It also occurs in western Switserland and northwestern Italy where its distribution meets the distribution of Natrix tessellata.

The Dice Snake occupies more or less the same niche and they seem to exclude each other very strong.

They need to be sun exposed so they can bask on the shores.

Personally I have observed them over the years on numerous occasions (Bol, 1984) in the small crystal clear rivers and creeks in the South of France, in the Ardèche, the Cévennes and near Saint Tropez.

It has always been one of my favorite holiday activities on beautiful, hot and sunny days in the middle of the summer: to walk thought the creeks and observe Natrix maura hunting for fish and tadpoles on the bottom of the creeks.

The guidelines for captive maintenance for T.a.atratus (Bol, 2007) also apply in general for Natrix maura.
In 1987 I wrote an article about Natrix maura (Bol, 1987).
The hibernation can be slightly longer for the Viperine Water Snake then T.a.atratus.
Natrix maura is unlike all the Garter Snake species egg laying.

So it is important to offer a little container with moist sphagnum in a corner of the terrarium for the females to deposit the eggs.

Once the eggs are laid I remove them from the terrarium and incubate them at 24 – 27 ⁰C.
In the past I did that “au bain marie” but the last years I simply put the box with eggs in my snake room which is in the summer months (when the eggs are laid) during daytime around the 25 – 27 ⁰C.

After hatching the baby snakes are put in a small terrarium and food is offered after they have shed their skin for the first time after 10 – 14 days.

My breeding group consists of offspring of snakes originating from exclusively French populations, amongst others from the Ardèche, the Cévennes and coastal rivers near Saint Tropez.

One of my males that originated from my first successful breeding back in 1986 lived for 23 years in captivity until it died in 2009 and he sired many offspring.

I kept one of his daughters born in 2009 myself and she has been laying eggs for about 4 years now so this line continues in captivity already for 30 years.

My 6 adults snakes are all unrelated. I choose my breeding snakes for differences in coloration to preserve a part of the natural variation as it is seen in the wild. I have for instance a reddish female, a greenish female and a brown female.
One of the exciting aspects of breeding this species is this huge variation in color and pattern that makes almost every individual snake unique.

For years I made little drawings of the dorsal neck pattern to identify the snakes later on.
When the snakes are born they already have their own typical pattern of darker spots, but the ground color is dull grayish.

With each shedding they start to get more color and only after 6 – 12 months they reach their final dorsal color.

So raising a clutch of Natrix maura babies is always fun to do, to see them get more beautiful and colorful every time they shed their skin.