In July 2008 I visited Marin County (Califonia, USA) in an effort to explore the local herpetofauna. Two of the habitats I visited were a fresh water lagoon and a small pond made for cattle to drink from. Both the lagoon and the pond are very close to the ocean and at sea level.


The California coast is heavily influenced by the Pacific Ocean with its cold Gulf stream. The coastal strip is often covered in fog. When this happens the temperature hardly rises even in the middle of the summer and the temperatures can be as low as 12 – 18 °C during the day  A few kilometres away from the coast the temperatures are often much higher. On this specific day while driving towards the coast it was foggy all the way, but when I arrived at the coast a strong sea breeze was blowing away the fog. Once the skies cleared temperatures rose quickly to 25 – 30 °C. 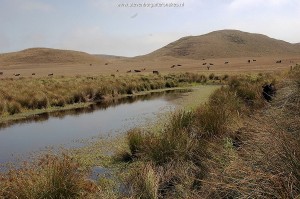 Around three o’clock in the afternoon I arrived at the small cattle pond that appeared strongly polluted by cow droppings. De pond was approximately 10 meters long and 4 meters wide and relatively shallow (max 50 cm I guess). The main inhabitants of the pond were large numbers  of the rare California Red-legged Frog (Rana draytonii). This endangered and protected species was not well protected in the pond! Two species of Gartersnakes were hunting simultaneously at these frogs: The Santa Cruz Gartersnake (Thamnophis atratus atratus x hydrophilus ) and the California Red-sided Gartersnake (Thamnophis sirtalis infernalis). 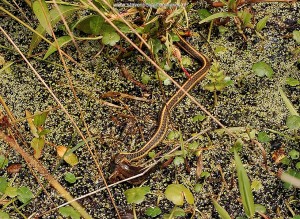 The Santa Cruz Gartersnakes from this specific location in Marin County have three beautiful warm-yellowdorsal stripes. The habitat is located in the broad zone where two subspecies of Thamnophis atratus intergrade: T. atratus atratus and T.a.hydrophilus. Formerly these snakes were treated as a distinct subspecies: Thamnophis atratus aquaticus.The individuals in this population of the California Red-sided Gartersnake from Marin County are breathtakingly beautiful. The snakes are very red which contrasts strongly with the black parts of the pattern. The three dorsal stripes are very conspicuous and often blue coloured, especially when the snakes have shed recently. 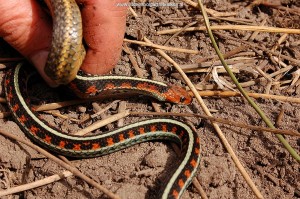 Upon arrival at 3 PM at the pond it was already quite warm (30 °C) and within a few minutes I observed  a T. atratus with a huge tadpole in its mouth. It was a male snake of about 50 cm. The tadpole was actually too large for the snake too swallow easily. The snake had eaten the tail of the tadpole but could not get it’s jaws around the hind legs. While I was taking pictures a second snake crawled in front of my lens. It was a female T.s.infernalis (approximately 46 cm). 1 or 2 other T.s.infernalis were observed hunting in the pond within 15 minutes. Not bad for such a small pond I thought. 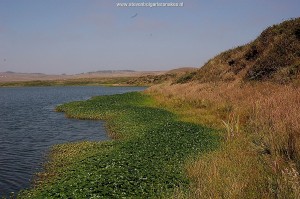 Then I hiked to the much larger fresh water lagoon that is for sure a few hectares in surface area. Due to the strong wind in combination with the larger water mass it felt much colder. I could not observe R. draytonii or any other amphibians (or fish). After 1 hour of searching I discovered 1 T. atratus and 3 Coastal Garter Snakes (T. elegans terrestris). All 4 snakes were observed close to the water’s edge.
The T. atratus was a juvenile of probably 1 year old and it measured about 30 cm in total  length. All 3 T.e.terrestris were around 40-50 cm long. This coastal population of T.e.terrestris belongs to the so-called “red morph” but the red in these specimens was not as nice as many T.e.terrestris I have seen in San Mateo and Santa Cruz County. Most snakes appeared quite dark. But in general T.e.terrestris becomes brighter red with age, so they might have been too young to show the redder colours. 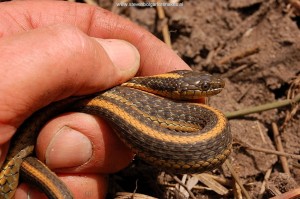 Around 5 pm I walked back to the car over the slightly raised trail along the pond. I checked out the pond once more and observed 1 T.atratus (a young female 1 year old;  approximately 33 cm) and a rather large T.s.infernalis that got away so I could not measure it or determine its sex.
The sun was dropping fast and was still shining on the western “slope” of the trail and on top of the trail. Temperatures were dropping fast as well due to the cold sea breeze.

This situation and microhabitat reminded me of observations I made in a coastal park in British Columbia, Canada. In this coastal habitat (located at sea level) also three sympatric species of Garter Snakes occur. In spring and autumn I could find many Garter Snakes concentrated on a similar dike that had a warm microclimate late in the afternoon. 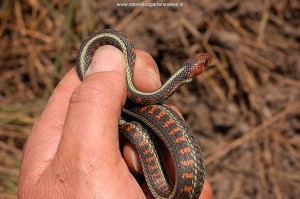 Searching intensively and concentrated on the warm side of the dike in Marin County gave an unexpected and spectacular result. Between 5 and 6 PM  I observed about 10 T.s.infernalis and 2 adult T. atratus basking on the dike. The population in this confined habitat was much larger then I had expected based on my observations in the middle of the day and the size of the pond. How can so many snake live of the amphibians in this small habitat?The 2 T. atratus (a male and a female) were 62,5 and 65 cm long.The female was still pregnant and I could feel about 15 babies in her belly. The 10 T.s.infernalis ranged in length from 56-102,5 cm; 6 female and 4 males. The largest snake was (obviously) a female that bit me quite fanatical and painful when I tried to pick her up. She was quite skinny and through palpation I could feel about 12 babies in her belly. A small amount for such a huge snake. The largest male had a total length of 64,5 cm and had eaten a lot of food (most likely frogs). He was basking at least 10 metres away from the pond on the dike and he looked very old. Completely covered with scars. Unfortunately the batteries of my camera were empty so I could not take any pictures of the snake.