The warmest day this year so far. 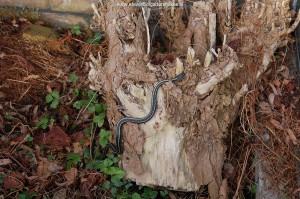 March 18th 2010 was predicted to become the warmest day of the year so far and maximum temperatures were expected to rise up to 15 ºC.

The previous day was already relatively warm and when I got home after work at 6 PM the bright coloured pickeringii male was still on top of the Buxus bush. Of course the sun was long gone, but possibly the 10 – 12 ºC the snake could reach on the top of the bush was preferred over the much lower temperatures of the soil or even underneath the soil (2 – 3 ºC perhaps?). So this was also a remarkable observation, normally snakes are gone when temperatures are this low without any sun. 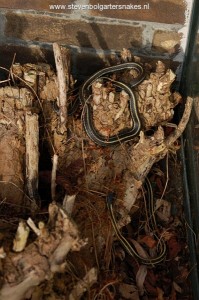 March 18th I had taken a day off to do some painting and at the same time check the activity of my snakes outdoors and see how many snakes have survived the unusually harsh andcold winter.

Around 8.20 AM I had the first peak in the outdoor terrarium. Temperature was around 8 ºC and the “pale” sun was shining through the trees because there are no leaves on the branches yet.
One of the males of T.s.pickeringii was basking on a wooden log.

From 9 AM onwards the sun can shine directly (not blocked by branches) in a big part of the  outdoor terrarium in this time of the year.

At 9.30 AM temperature had risen to 10 ºC and the second male T.s.pickeringii appeared at the surface. 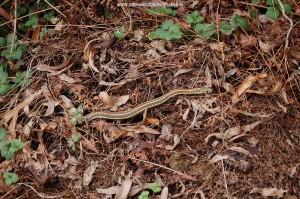 At 11 AM my male Thamnophis radix was visible: the 1st radix activity of 2010.

Around noon a part (40%) of the terrarium is in the shade and the early morning basking spot does not receive any sun any more.

Only my 2 male pickeringii are basking; one of them was still at the same spot in the shade, the other one had followed the sun and was basking in full sunlight. The radix male was out of sight. 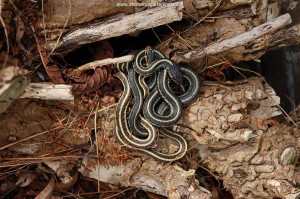 At 1.45 PM the last sunrays were shining in the front corner of the outdoor terrarium and one of the 2 pickeringii males was basking in those last rays. The other one was still basking in the shade like at noon. Normally the snakes move along with the sun to warm up.
So the sun can shine directly and bright in the terrarium from 9 AM – 1.45 PM on March 18th. Almost 5 hours.

At 3.15 PM both pickeringii males were visible, and the radix male only showed his head. The rest of its body was hidden under a tree log, and it withdrew its head quickly when he saw me. There was no sun in the terrarium but air temperature was around 16 ºC. 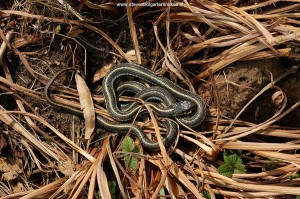 The 2 pickeringii stayed active and visible until late. One of them disappeared around 5 or 6 PM, the other one was still visible out in the open at 8 after it got dark.

The evening was unusually soft and it was probably still 13 – 14 ºC.

Of course I did not measure the body temperature of the snakes but I guess for the first time this year their body temperature may have been well in the twenties, at least of the male pickeringii.